The Achilles tendon affects your ability to do everything from walking to playing competitive sports. When a patient overstretches his or her Achilles tendon, it can result in a full or partial tear in the tendon, also known as a rupture. In addition to causing a great deal of pain, ruptures can have a profoundly negative impact on your quality of life and prevent you from performing activities you once enjoyed. Because these injuries tend to worsen with time, it?s important to contact a board certified orthopedic surgeon for immediate attention after an Achilles tendon tear.

Causes
Causes of and contributors to Achilles tendon rupture include trauma (caused by injury, usually an acceleration injury such as pushing off or jumping up). Preceding tendon problems. Chronic Achilles tendonitis (can lead to small tears within the tendon, increasingly weakening it). Certain drug therapies/treatments. Drugs that have been linked to Achilles tendon rupture include. Fluoroquinolone antibiotics - after nearly 900 reports of tendon ruptures, tendonitis and other tendon disorders (most associated with the Achilles tendon) linked to Ciprofloxacin (Cipro) alone were collected in the U.S. Food and Drug Administration (FDA)?s database, at least one public-interest group petitioned the FDA to recommend that a "Black Box Warning" be added to Cipro's packaging. Some researchers speculate this class of antibiotics is toxic to tendon fibers, and that in some cases may reduce their blood supply. Patients should at least be more aware of the potential for ruptures so that they can be switched to other antibiotics at the onset of early warning signals such as tendon pain.

Symptoms
You may notice the symptoms come on suddenly during a sporting activity or injury. You might hear a snap or feel a sudden sharp pain when the tendon is torn. The sharp pain usually settles quickly, although there may be some aching at the back of the lower leg. After the injury, the usual symptoms are a flat-footed type of walk. You can walk and bear weight, but cannot push off the ground properly on the side where the tendon is ruptured. Inability to stand on tiptoe. If the tendon is completely torn, you may feel a gap just above the back of the heel. However, if there is bruising then the swelling may disguise the gap. If you suspect an Achilles tendon rupture, it is best to see a doctor urgently, because the tendon heals better if treated sooner rather than later. A person with a ruptured Achilles tendon may experience one or more of the following. Sudden pain (which feels like a kick or a stab) in the back of the ankle or calf, often subsiding into a dull ache. A popping or snapping sensation. Swelling on the back of the leg between the heel and the calf. Difficulty walking (especially upstairs or uphill) and difficulty rising up on the toes.

Non Surgical Treatment
The treatments of Achilles tendonitis include resting the painful Achilles tendon will allow the inflammation to subside and allow for healing. A period of rest after the onset of symptoms is important in controlling Achilles tendonitis. In patients who have more significant symptoms, a period of immobilization can help. Either a removable walking boot or a cast can allow the inflamed tendon to cool down quickly. A heel wedge can be inserted into the shoe to minimize the stress on the Achilles tendon. These can be placed in both athletic and work shoes. Applying ice to the area of inflammation can help stimulate blood flow to the area and relieve the pain associated with inflammation. Apply ice several times a day, including after exercise. The pain and swelling most commonly associated with Achilles tendonitis can be improved with non-steroidal, anti-inflammatory medications (NSAIDs) which include Celebrex?, Advil?, Motrin?, Naprosyn?. Be sure to consult your physician before starting any medications. Physical therapists can help formulate a stretching and rehabilitation program to improve flexibility of the Achilles tendon. Cortisone injections should not be used for Achilles tendonitis. Studies have shown an increased incidence of Achilles tendon rupture after cortisone injections. 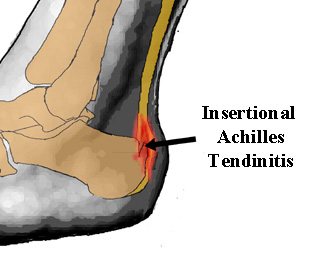 Surgical Treatment
The best treatment for a ruptured Achilles tendon in an active individual is typically surgery. While an Achilles rupture can sometimes be treated with a cast, splint, brace, or other device that will keep your lower leg from moving, surgery provides less chance that the tendon will rupture again and offers more strength and a shorter recovery period. Surgery may be delayed for a period of a week after the rupture, to let the swelling go down. There are two types of surgery to repair a ruptured Achilles tendon and both involve the surgeon sewing the tendon back together through the incision. Open surgery, the surgeon makes a single large incision in the back of the leg. Percutaneous surgery, the surgeon makes a number of small incisions rather than one large incision. Depending on the condition of the torn tissue, the repair may be reinforced with other tendons.

« How To Diagnose Bunions
Profile

Login to quote this blog

You cannot quote because this article is private.